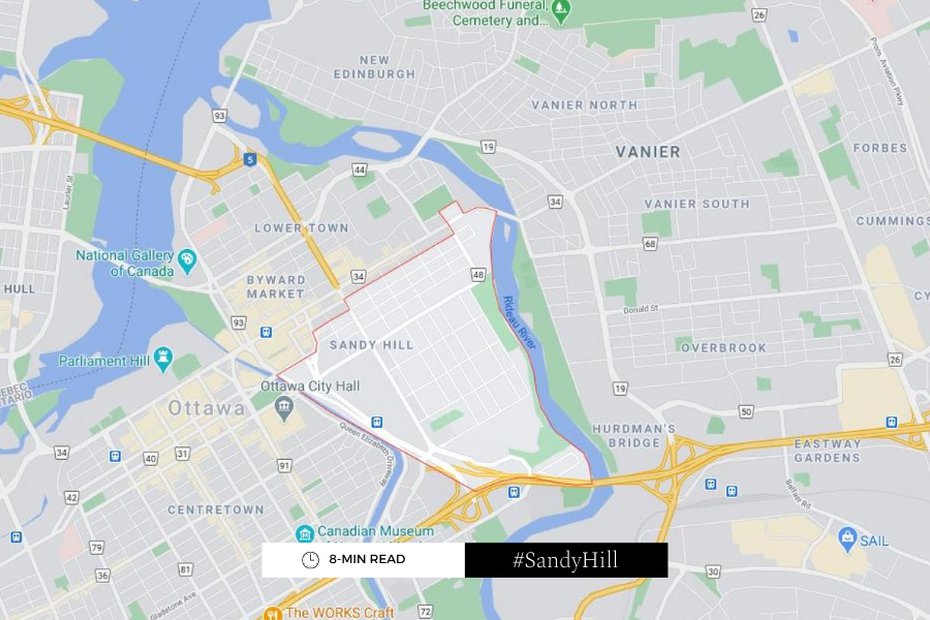 Welcome to historic Sandy Hill! You are going to love the diversity, ample green space, proximity to the downtown core, amazing public transport options, and unique character that this downtown community has to offer!

Bordered by Rideau Street to the north, Highway 417 and the Transitway to the south, the Rideau River to the east, and the Rideau Canal to the west.

Commuting in Sandy Hill and surrounding communities is no problem as it is car, public transport, walking, and biking friendly. Most residents in the Sandy Hill area take public transportation on a daily basis and many walk or bike in the warmer months. The area is well served by mass transit with 3 LRT stations in the area and plenty of bus route options.

Due to the large influx of wealthy white-collar workers in the 19th century with a broad cultural and religious base, Sandy Hill became, and still is today,  an architectural mosaic of different styles including Spanish Colonial Revival, Victorian, Georgian, and Romanesque. The building of these glamorous homes was supported by the influx of tradespeople, skilled woodworkers, and masons that flocked to Ottawa in hopes of finding work with the building of the parliament buildings as Ottawa had recently become the capital of Canada.  The increase of diversity of tradespeople as well as increase in supply availability with the opening of more rock quarries and the specialization of the lumber industry in the area gave an incredible array of options to wealthy landowners building their dream homes.

Today, Sandy Hill is one of Ottawa’s most diverse neighbourhoods and has grown to include long-term residents, embassies (many of which have taken up residence in these historic mansions), students, families, and professionals.  The large student base is due to Sandy Hill’s close proximity to the University of Ottawa and Le Cordon Bleu. It is also just a short commute on public transport to Carleton University, Algonquin College, and Richard Robinson Fashion Design Academy.

Most houses were built between 1900 and 1950 with the oldest house being built in 1844. The 1980’s and 90’s saw approximately 175 row houses added to the area. Fifty-three percent of the homes are detached homes while 47% are row or semi-detached homes. Most people in the area own their home with an 87% split of owners and 13% renters. The demographics are split between families, of which one child per family is most common, with 35% being couples, and the remaining 18% making up single people.

Sandy Hill is often divided into 4 distinct areas; North Sandy Hill is the area to the north of Laurier Avenue and consists of mostly older buildings from the 1800's. South Sandy Hill is located to the south of Laurier and mostly consists of post World War II homes along with some much older. Strathcona Heights is located below Mann Avenue and in the far south end of Sandy Hill. It is much smaller than the previous two areas geographically, but has a similar population side and mostly consists of low-rise apartment buildings, subsidized housing, and cooperatives. Last is Robinson Village, which is below the Strathcona Heights enscarpment near the Rideau River. This area contains mostly low-rise aparmtent buildings and houses with some industrial use.

Sandy Hill has plenty of education options available, including 6 public schools and 5 Catholic schools with both Francophone and bilingual options assigned to the area.  There are also plenty more schools in the area of Lowertown and Uppertown that kids living in Sandy Hill can attend!

The Catholic schools include:

Private Schools in the area are:

Sandy Hill has a shocking amount of greenspace and outdoor recreation options considering its central location.

Strathcona Park along the Rideau River is one of Ottawa’s most beautiful parks and during the spring, summer and fall, you will see plenty of people picnicking, sunbathing, playing frisbee and studying on their break from University of Ottawa. The park features a play structure, Dutchie’s Hole wading pool, baseball diamond, and mini ruins for kids to explore. Strathcona Park with its River-side paths is a stunningly beautiful place to go on a walk with family, friends, and pets!

Due to the dense population of Sandy Hill, there are plenty of dining options in the area including The Sandy Hill Lounge and Grill (fondly known as the SCHLAG), Shawarma Palace (Nick’s personal favourite shawarma spot), Signatures Restaurant at Le Cordon Bleu, Father & Sons, and a branch of Happy Goat Coffee with many more dining options! If none of the dining options in Sandy Hill tickle your fancy, you are close to the great choices in the Byward Market and on Elgin Street.

Sandy Hill is served by a total of 20 grocery stores, 24 coffee shops, 15 pharmacies, and 11 gyms, fitness centres and is close to Rideau Shopping Centre, the Byward Market dining and shopping, and Elgin Street boutiques. So, as you can see, living and working in Sandy Hill has some benefits!

Sandy Hill has a long history dating back to the 1870’s and has seen many changes throughout the years. Up until the 20th century, this area of Ottawa was considered one of the most affluent as can be seen by many of the old mansions that still stand today.

Before there was a community in Sandy Hill, it was just that, a sandy hill. It was barren land that had been logged for the past 30 years, but when Ottawa became the Capital of Canada, this was the area that most of the white collar workers for the new government chose to set down roots.

During the 1870’s, Sandy Hill saw the growth of both residential housing as well as institutional buildings. These buildings were used to help further attract upper class people to the area, which was needed considering the area was described as, “...rat-infested, deforested hill with a sewage problem.”. It was even reported that Sir John A. MacDonald had to move his desk upstairs at Stadacona Hall because his ground-floor study smelled so bad! Some of these institutional buildings that were errected during this time were the College de Bytown, (which is now known as the University of Ottawa), St. Joseph’s Rectory, the Albion Hotel, the Carleton County courthouse, the Carleton County jail, and the registry office.

The location of Sandy Hill was the real draw to its residents as it was close to the new parliament in Uppertown and was a relatively easy commute for the white collar workers who lived in the area. It was also close enough to the Lowertown market for servants to travel by foot to shop for groceries, which meant less resources were spent on carriages and horses.

Due to the influx of wealthy homeowners, the main thing that tied them together was not religion or culture, but economic standing. The community of Sandy Hill has a rich history of community action and participation, playing a huge role in the shaping of the area and preserving its heritage sites and older buildings.

Because of Sandy Hill’s location and development into a mature neighbourhood inhabited mainly by middle and upper class people lead to the arrival of Embassies, of which now there are around a dozen in the area, mostly overlooking Strathcona Park. Now, Sandy Hill is one of Ottawa’s most diverse communities and is home to people from all different economic, religious, and cultural backgrounds. The barren landscape with a sewege and rat problem is a thing of the past with Sandy Hill's beautiful parks, mature trees, and beautiful streets.

Check out this tour of historic Sandy Hill!

Families are equally at home in Sandy Hill with lots of great school, daycare and playdate options, outdoor activities, and a wonderful and supportive community.

Whether you are a student, an ambassador, or something in between, Sandy Hill has something for you!

Sandy Hill is split evenly between the two official languages with large communities from Somalia, Lebanon, and Haiti.